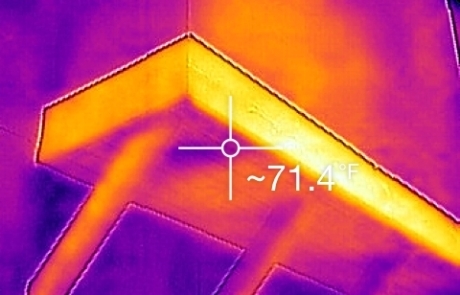 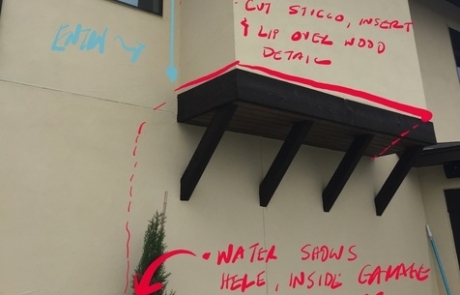 Back when the rains were heavy earlier this year we literally spent 25% of our time responding to water overwhelming aspects of construction that aren’t equipped to handle certain flows of water in a shortened amount of time.  These photos are of a real live trouble shooting that we did to determine where a small amount of water was getting in to a garage wall.  With a thermographic gun, you can distinguish between colder and warmer temperatures that aren’t readily apparent to the naked eye.  If you look at the other photo, that was taken at the same time you can see what I’m talking about.  This photo allowed us to create a game plan based off the specific construction condition that was allowing water to get trapped in the corner.  My notes are written as an overlay and immediately shipped out to the project manager to execute and the trades.  These photos demonstrate the power that we now have which didn’t exist as an affordable solution even a few years ago.  They aren’t fool proof, but they save a lot of time and wasted effort if you are hunting in the wrong area.  There was a scene in Raiders of the Lost Ark, where the Nazi’s were all gathered looking for the Ark of the Covenant in the wrong pyramid and Indiana Jones was in the right pyramid because he had the proper tools to guide him there.  I think about that scene all the time when troubleshooting for water because at the point of exit, your original entry area can literally be 20′ away.  In the end we are constantly looking for ways to disrupt the industry and get an edge for our clients.  This is just one of them but wanted to share with you.